Honoring the centennial birthdays of legendary choreographer Jerome Robbins and composer Leonard Bernstein, The Boston Ballet opened its 55th season on a joyous, lighthearted note on Thursday, September 6 with Genius at Play continuing through Sunday, September 16 at the Boston Opera House.  Genius at Play certainly lives up to its name, a production with glimpses of Robbins and Bernstein’s signature dance moves, music, and lively banter sure to leave the audience in carefree spirits.  Click here for more information and for tickets.

Accomplished conductor Beatrice Jona Affron opened the show, leading the orchestra with Leonard Bernstein’s sparkling and triumphant masterpiece Overture to Candide, first performed in 1957.  Much of Genius at Play celebrates the very nature of dance and its playful competitiveness and Overture to Candide quite fittingly sets the tone.

With choreography by Jerome Robbins and jazz-infused music by Leonard Bernstein, Fancy Free is the source material for what became the hit Broadway musical and Academy award-winning film, On the Town, a tale about three sailors portrayed here by Irlan Silva, Derek Dunn, and Michael Ryan, who are on shore leave in New York City.  Taking a page from the old movies with cheerful 40s costumes by Kermit Love, these sailors realize they are in over their head when they meet three passers-by portrayed by Emily Entingh, Viktorina Kapitonova, and Dawn Atkins.  With a multi-dimensional, romantically-lit set equipped with a vivid, leaning lamp post, these sailors depict a wonderful camaraderie as they embark on an amusing night with plenty of surprises. 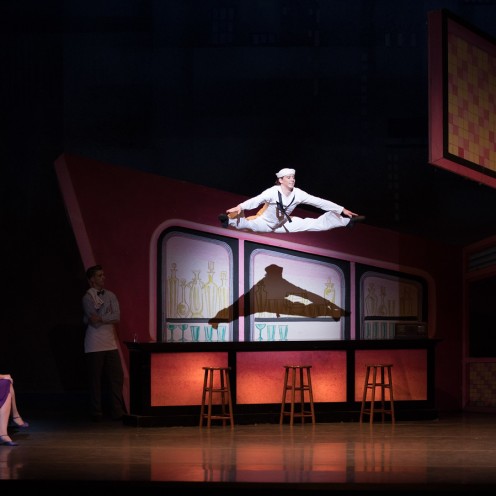 With music by Philip Glass and choreography by Jerome Robbins, Glass Pieces is quite the gem.  Taking place in what looks like a subway station, Glass Pieces has a palpable rhythm and urgency as dancers are unleashed into a celebration of dance in the city.  From a plain landscape into a spectrum of color, Glass Pieces transforms into a splendid piece of artistry as dancers perform in a variety of styles in silhouette, reflective, and in unison.

With comic wit, vintage flair, and renowned choreography, The Boston Ballet proudly presents Genius at Play through Sunday, September 16 at the Boston Opera House.  Click here for more information and for tickets.  For future events and more, follow Boston Ballet on Facebook and Twitter.