Award-winning, Boston based singer-songwriter and dynamic, multi-instrumentalist Sarah Blacker is always listening for a new beat.  Her most recent album, In Waves, experiments with new rhythms and is a departure from her usual sundress rocker fare.  Her energetic, live performance is encouraging people to the dance floor and just may be the basis for her next album to be released early next year.  She will perform with the New England Groove Association at Club Passim, 47 Palmer Street on Saturday, January 7, just a few days shy of her birthday.  New Jersey based Greg Townsend of Perilune opens.  The concert starts at 8 p.m.  Click here for more on Sarah and here for ticket information!

Sarah Blacker, who also works as certified music therapist, talks about the inspiration behind In Waves, her exciting new sound, and why her music should not be referred to as folk.

Jeanne Denizard:  Before we talk about your latest album In Waves and your upcoming appearance at Club Passim on January 7, tell me about touring and what you did for the holidays.

Sarah Blacker:  We’ve been taking it a little slow around the holidays.  Since our last album In Waves was released in spring 2015, we’ve done some recordings for a new album in our music room.  We want to capture a live and comfortable homey vibe, something I haven’t really done yet besides demo and free downloads.  We’re doing an entire album like that.

I was recently in Beverly, Massachusetts and I sat in and sang with the Percy Hill Choir at the Paradise in Boston.  That was a real blast.  My touring partner and my sweetie, Aaron Katz and his band, Percy Hill had reunited.  I got to sing in their choir which was a lot of fun since I used to go see them in high school.

JD:  I understand you are currently living in Salem, Massachusetts and you are a talented multi-instrumentalist.

SB:  Yes, I play the ukulele, guitar, piano, and a little bit of percussion.  I used to play a little mandolin, but it’s been a while and I stopped writing on that.  Whatever I can write on is really the idea.  I usually travel with an electric and acoustic guitar and my ukulele.  Varying it up makes things a little more exciting for people in the audience, hearing different sounds, vibes, and styles.

JD:  Variety is always best for a live performance.

SB:  Exactly!  Aaron and I have been playing together a little over a year now and he plays drums and djembe, but we will do a lot of improvising live depending on who is playing with us.  We’ve been playing with this amazing keyboard player and calling ourselves Sarah Blacker and the New England Groove Association.  Lots of improvising and if people want to dance, we try to keep the music going.

JD:  You will be changing it up again for the next album.

SB:  A lot of people have requested an album that sounds live because so much of what we do is based around the energy that we capture live and people can experience the music at a physiological level.  Sometimes getting into the studio and doing so much flavoring and production and compression can take away the human element to it.  We’re trying to make something raw, human, and that represents a mission about that live music, the energy that we really believe in. 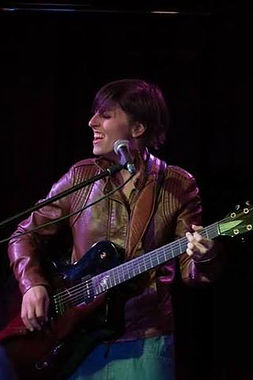 Sarah Blacker with her electric guitar

JD:  Your latest album, In Waves, was a bit of a departure from your well known sound.  What inspired that?

SB:  I think you get pigeonholed if you play an acoustic guitar.  A lot of people tend to think that I play folk music and I never felt like my music is classified as folk.  My sound has roots in classic rock, jazz, and a lot of pop music, and grunge from a lot of singer-songwriters from the 90s.  I’ve been trying to steer away from that.  I thought maybe I should put something out that shows another side to what I do and where I came up as a musician.

JD:  The title track, In Waves, has a rich, rhythmic beat to it.

SB:  Thank you.  My on and off bassist and producer, Sean McLaughlin, was a key element in coming up with that driving rhythm track behind it.  We modeled it after the Radiohead album, In Rainbows which is that poly-rhythmic base part and really makes it sound like a wave.

JD:  The album is called In Waves. Is there significance to that?

SB:  The title track is based around a really challenging year that I had.  I won’t go into too much detail, but I realized that someone I had been dating turned out to be a sociopath.  Everything I had been experiencing turned out to be a complete lie which is one of the reasons I decided to move up to Salem and rebuild my life from a place where I thought everything had crumbled.  That was part of it, just learning to ride the waves of emotion and know that everything happens for a reason.  If you can just move through it, everything will be alright.  I also spent a lot of time on the ocean during that year, which is where the oceanic theme came from. 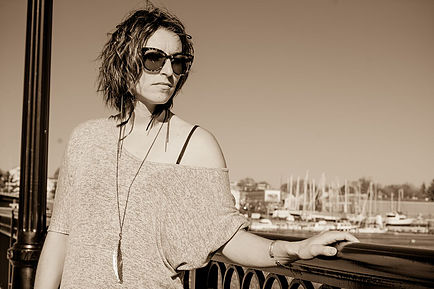 JD:  Listening to you, it sounds like things are looking up.

SB:  Absolutely!  It was really a blow to the heart and reality, so I’ve just been rebuilding.  I love living in Salem by the ocean.  I feel like I can be myself, learning to trust in the process, and maybe not rush things so much.  As a young musician, you want to push to make everything happen yesterday, but I find it important to really take care of yourself along the way.  I’m ready to experience this in as many ways as possible and I think evolving as an artist is just part of the journey.

Sarah Blacker and the New England Groove Association perform at Club Passim on Saturday, January 7.  Click here to learn more about Sarah and her music.  Click here for tickets as well as Club Passim’s full concert schedule.  Club Passim is located in Harvard Square and easily accessible by public transportation.