With the recent premiere of the highly-anticipated FX biographical miniseries, Fosse/Verdon about the sizzling creative and romantic partnership between legendary filmmaker and choreographer Bob Fosse (Sam Rockwell) and spectacular Broadway dancer Gwen Verdon (Michelle Williams), it seems Fosse and Verdon’s influence is still everywhere.  So, it is not surprising that South Shore Theatre Works (SSTW) is taking on what SSTW’s Executive Director and President Richard Bento called, “a dream production of mine to direct,” Chicago the Musical continuing through Saturday, April 20 at Abigail Adams Middle School in Weymouth, MA.  This show is not for young audiences.  Click here for more information and tickets.

One of Fosse’s most popular creations was a dark satire dealing with corruption and murder during the Jazz age called Chicago the Musical.  This Tony award-winning production continues to thrill audiences as one of the longest running Broadway musicals and its most recent 2002 film adaptation was the 2002 Academy award-winning film starring Renee Zellwegger (Roxie), Catherine Zeta-Jones (Velma) and Richard Gere (Billy Flynn) garnered a few Academy Awards. 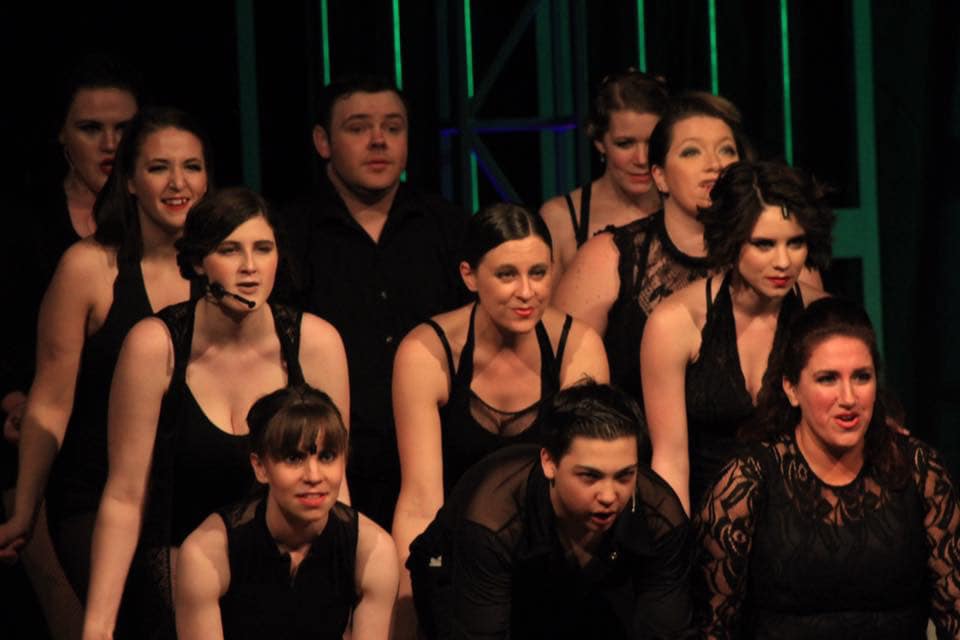 How has Chicago the Musical earned its longevity?  The proof is in its clever, satirical storytelling that isn’t afraid to occasionally shock, its sizzling choreography, memorable characters, catchy music, and its frank, timeless message about humanity.  With an impressive, semi-interactive fifteen-piece orchestra led by conductor Doug Gerber that elevates the action onstage plus additional songs not featured in its most recent film adaptation, this darkly humorous production is off to a good start.

Headlining this colorful cast is Stephanie Wallace as desperate, hot tempered and fast-living Roxie Hart.  With a great scowl and energetically navigating Roxie’s myriad of emotions, it is easy to see how Wallace relishes this character.  She is never better than during her natural and engaging signature song, Roxie Hart.

Jaclyn Cleary lends a mix of sharp sophistication and mayhem to Velma Kelly, a former dancer turned criminal.  Her wild, light eyes reveal a smugness and unsteadiness that will keep you guessing her next move.  Having seen Chicago the Musical quite a few times, I admire Jaclyn Cleary’s sleek vocals and not so by-the-numbers rendition of All That Jazz.  She and Matron Mama Morton, portrayed charismatically by Hanna Ford, have great chemistry.  They are two sides of the same coin in their rendition of Class.

Staring down her glasses with an ironically sophisticated air is Hannah Ford as Matron Mama Morton.  With a belt that certainly packs a punch, her rendition of When You’re Good to Mama clearly shows she knows how to pull some strings and depicts Mama in a different and refreshing way.

Wielding a cane, Aaron Stolicker masterfully navigates the cast and the audience as suave, shrewd, and debonair Billy Flynn, sharply dressed in a black tuxedo.  He’s full on smirking charm in the number, All I Care About is Love and quite the storyteller in his rendition of They Both Reached for the Gun, a complex, energetic number with strong choreography.  J. Merlo adds some humor and some serious pipes as journalist Mary Sunshine.