“When life itself seems lunatic, who knows where madness lies?”

In the midst of action, suspense, heartbreak, and humor in multiple Tony award-winning musical, Man of La Mancha, lies Don Quixote author Miguel de Cerventes’s wise words, one of many timeless reflections declared during Americana Theatre Company’s moving, insightful musical, Man of La Mancha at the Spire Center for the Arts in Plymouth, Massachusetts through Sunday, July 29.  This show is not for children.  Click here for more information and for tickets.

Based on the classic tale, Don Quixote, Americana Theatre Company’s Man of La Mancha by Dan Wasserman is steeped in theatrical riches from its strong, edgy cast, powerful voices, a hint of Monty Python humor, and diverse combat scenes, but the real heart of this work is found in Cervantes himself, a beacon in dark times.  Americana Theatre Company prides itself on its stellar storytelling and this one is for the ages.

Directed by Michael Kirkland, Man of La Mancha addresses the everlasting battle between idealism and realism through a play-within-a-play.  With the exception of Sancho Panza, portrayed with wide-eyed optimism and unflinching faithfulness by Ruben Nevarro, each character depicts a dark side in humanity, but not without redemption.

Man of La Mancha kicks off without a hitch, showcasing a wide range of comic, stylized, and clever combat scenes by Derek Martin that often take the audience by surprise.  With just two onstage guitars and an offstage piano, the music accompaniment is delightfully subtle and intimate as the musicians melt into the background.  From colorful gypsy costumes and corset dresses to detailed, embroidered vests and leather armor, costumer Brian Kenerson zealously captures the beautiful and harsh Reformation era.

Scott Wahle steps into Cervantes/Don Quixote’s brown leather boots with a natural assurance.  Finding himself among a group of prisoners, author and poet Miguel de Cervantes creates a defense in the form of a play in order to keep his possessions and potentially save his own life.

Wahle has a long history being a charismatic, relatable storyteller as a local television personality and in theatrical roles such as Walt Disney-esque Paragon Park creator George A. Dodge in Company Theatre’s original musical, Paragon Park or as smooth-talking Nathan Detroit in Reagle Music Theatre’s slick musical, Guys and Dolls.  He draws from that and more to deliver a powerful, emotionally-charged, multi-layered performance as a sympathetic admirer in the tender song, Dulcinea to a valiant hero in epic numbers such as The Impossible Dream and Man of La Mancha.  Alongside such dark characters, he is idealistic and compassionate, but hiding a secret. 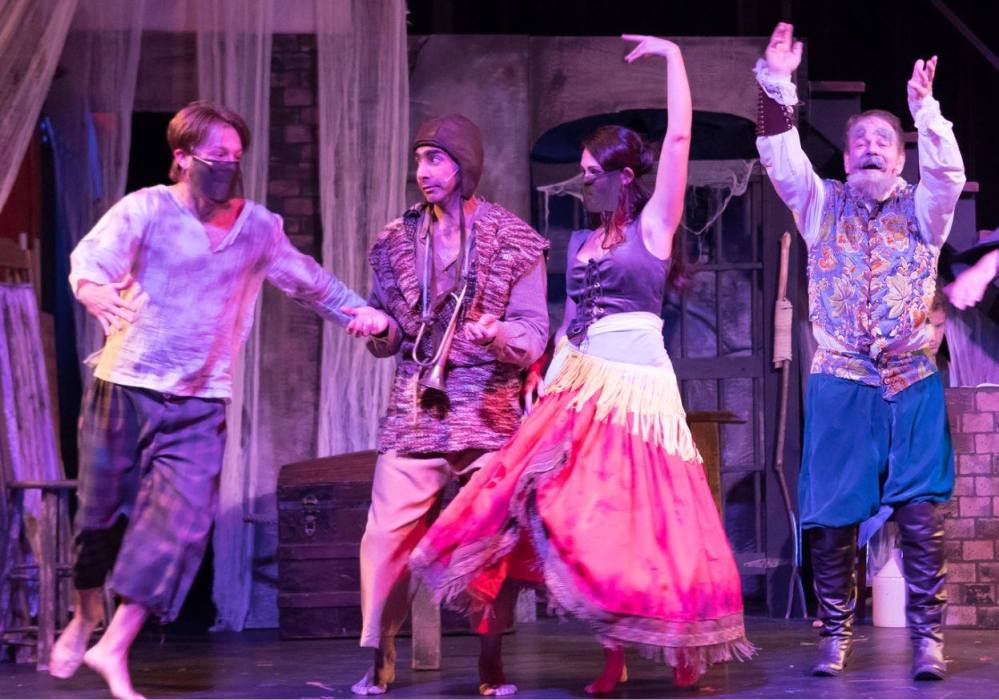 The chemistry between the cast members crackle, but most notably between Scott Wahle as Cervantes/Don Quixote and Ruben Nevarro as his unfathomably loyal squire, Sancho Panza.  It is a vivid, nurturing friendship every true friendship should strive to be.  Nevarro has his own set of crisp vocals in a warm rendition of I Really Like Him and comical A Little Gossip. 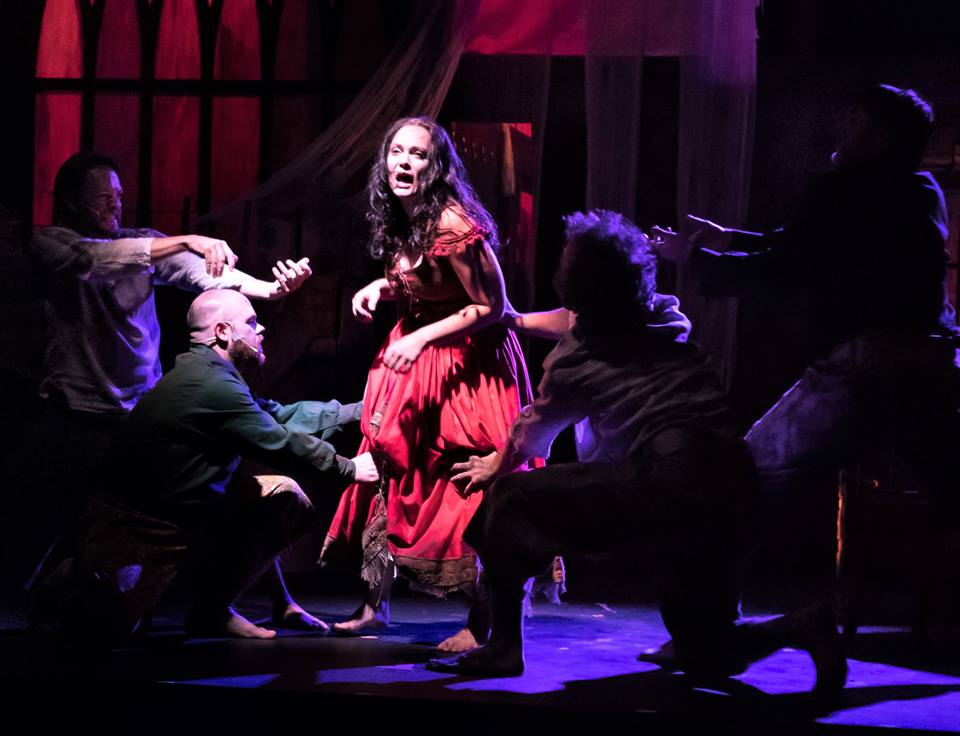 Wahle shares sweet chemistry with Bethany Lauren James, who delivers a brilliant performance as uncouth, harsh, suspicious, and yet compassionate spitfire Aldonza.  Surrounded by menacing muleteers, she first appears strained and exasperated in a red corset dress for the comical and fiery number, It’s All the Same.  A hard realist who can’t imagine otherwise, James is a wonderful foil for Wahle and holds her own among a cast of powerful characters.  She masters the meaty role and her expressions are a complex web of emotions, her character constantly torn between what to think and how to feel.

Derek Martin is intriguing as a quietly distressed Padre.  Dressed in rust colored robes, Martin is torn by what is right and what is ultimately good for the human spirit, offering a tender and reflective rendition of To Each His Dulcinea.  With vivid, comical expressions and a deep baritone, David Friday is hilarious as a panicked Innkeeper.  Caitlin Skinner as Antonia, Derek Martin as Padre, Erin Friday as Housekeeper, and Jesse Sullivan as Dr. Carrasso lend their impressive vocals to the multifaceted number, I’m Only Thinking of Him.

Americana Theatre Company is taking the South Shore on an epic quest in the multiple Tony Award-winning musical, Man of La Mancha at Spire Center for Performing Arts in Plymouth, Massachusetts through Sunday, July 29.  Starring TV personality Scott Wahle, a fascinating cast, and featuring a memorable score that includes the classic number, The Impossible Dream, Man of La Mancha is based on Cervantes’ masterpiece Don Quixote.

Sleepless Critic:  This is your first time directing Man of La Mancha.

Michael Kirkland:  It is, but it is also my seventh La Mancha.  I’ve been blessed to portray Sancho Panza four times professionally.  I’ve also played The Barber, have choreographed the combat and violence in the show maybe six of the seven times, but have always longed to direct it.

SC:  Doing a show that many times makes you that much more prepared of what works and what doesn’t.

MK:  Directing the show is a real blessing because I have formulated well germinated ideas about the piece and I finally have an opportunity to experiment with those ideas, but I never lock myself out of the possibility of change.

MK:  Yes, it is a physical show with combat fighting ranging from realistic to stylized to serious to comical narratives and techniques.  Similar challenges but different than swordplay.  Swordplay has more rules and challenges that come with it.  This is all hand to hand and found weapons, which are objects laying around that become unusual weapons.

SC:  Man of La Mancha’s The Impossible Dream in itself is epic.  So how did Americana decide to take on this show?

Jennifer Martin:  This is our third foray into musical theatre having taken on Grease and Lucky Stiff previously.  We try to choose stories that we believe matter, have great entertainment value, make our community better, and are ensemble driven.  Man of La Mancha is a storytelling, ensemble-driven show that works well with our company.  This show is great for that because Cervantes enters the prison and uses the prisoners to tell his story.

SC:  TV personality Scott Wahle stars as the Man of La Mancha.  He’s been in a few shows in the area such as Reagle Music Theatre of Greater Boston’s Guys and Dolls and Company Theatre’s Paragon Park.  He has a certain charisma and comic timing that fits Man of La Mancha.  How was the audition process?

JM:  We posted the audition on Backstage for our New York auditions and viewed about 500 audition videos for Aldonza, Sancho Panza, and Don Quixote (Cervantes).  After reviewing those videos, we traveled to New York and we did a full day of five minute audition slots.  We found Aldonza and Sancho Panza, but we still didn’t have our Man of La Mancha.  Americana’s President Peter Martin suggested his friend Scott Wahle.  Finding the Man of La Mancha was our actual quest and once we found him, everything fit into place.

SC:  What has been the show’s biggest challenge?

JM:  The first rehearsal process and making sure that above all, the words and richness of what was written is experienced by the audience while moving quickly.  The other challenge unique to our company is our four company members performing in the show are wearing multiple hats.  Managing Director David Friday plays The Governor and The Innkeeper while being the set builder and designer.  We’re doing a comedy, but sometimes it feels like a farce.

MK:  The concept we had settled upon affords an exploration of layers.  What I’m trying to communicate in this particular interpretation is even Cervantes does not completely understand the power of what he has written and it takes these prisoners and him watching how his story redeems them that truly brings home the power.

SC:  Man of La Mancha has something for everyone, but I think men will especially enjoy it.

MK:  It is a show with depth, substance, and great heart.  It also has some bite to it and aspects of it might be border line uncomfortable for people to experience.  I always think we can tell redemptive stories of girl scouts or in this particular instance, prostitutes.  The show makes a powerful statement by the end of this story.

SC:  What’s been your favorite part of putting the show together?

MK:  I love to collaborate.  We had collaborative sessions on the telephone before we ever got here, just kicking around ideas then settling upon how we are to realize the conceptualization of the piece.  Then we start working with those people on a day to day basis bouncing ideas off each other, then trying things, and then trying them on the performers.  Theatre affords you what some more isolated performing arts don’t.  Theatre is created and performed in community.  Good ideas are great, and once it is on the stage, it’s not mine.  It’s ours.

SC:  The current season includes Man of La Mancha, Sleepy Hollow, and The Gifts of the Magi.  How do Americana select each season?

JM:  We look at what would be good for the town of Plymouth based on audience feedback of what they respond to, interested in, what they love, and what they are longing for.  We chose Man of La Mancha because we love the story, thought we could tell it well, and saw that it hasn’t been told for awhile in this area.

Our selection process takes about four months of thought and steady, hard work.  The Legend of Sleepy Hollow was chosen because we realize this area values holidays and traditional stories.  We thought of doing a one man version of Sleepy Hollow.  Our founding director Derek Martin is currently working on adapting the script and our Managing Director, David Friday, will be performing it.  We’re excited about performing an old, beautiful story in a simple, straight forward and creative manner.

The Gifts of the Magi is a lovely, six person musical so dear and true to the holiday season.  We wanted to tell a holiday story and keep the cast small in the wintertime because we want to perform it in the Center for the Arts, a small space.

SC:  Studio Americana youth program delves into a lot of big fantasy productions such as Peter Pan, Cinderella, The Wizard of Oz, and Alice in Wonderland.  I understand fall registration is still open.

JM:  Yes, registration is still open.  At Studio Americana, we work with each child individually which is why we keep the shows intentionally small so each student has an equal amount of time.  A lot of students say it’s the best part of their summer.

SC:  What do you envision the future of Americana Theatre Company?

JM:  We still are a bit of a secret in the South Shore.  We are blessed to have consistent five star reviews from people who come.  When people finally come, they say I can’t believe I’ve missed you guys.  We’re expanding our season with a cabaret and fundraiser in March, a show through July and have offerings in October.

We’re a 501(c)3 company and have some great community sponsors.  As we get more support, we’d love to expand to a six show season where things are constantly happening.  People who come to Plymouth get the highest level of theatre across the United States, but we want our residents and guests to feel like this is also their hometown theater company.