Combine an onstage rock band nicknamed the Ungrateful Dead with a storytelling cast in 19th century St. Petersburg, Russia.  Throw in love at first sight, a duel, add some vodka, and a few winks to today’s technology and it is quite the tale…and that’s not even the half of it.

Expect the unexpected at Greater Boston Stage Company’s unique performance of Onegin, a semi-interactive musical that blends the traditional with the contemporary in surprising ways.  It explores how far one would go for love while its rock and roll vibe and comic moments show it doesn’t take itself too seriously.

Onegin pushes quite a few boundaries within its two hour time frame.  The show inhabits a myriad of genres and occasionally breaks the fourth wall, but underneath it all is a moving tale of love and loss and what it means when destiny is out of your hands.  The contemporary flair of this period piece may not appeal to staunch traditionalists, but the show has heart.

Opening with the rollicking number A Love Song, these singing storytellers describe a man irretrievably in love and one who is roguishly indifferent to it. Michael Jennings Mahoney portrays excitable and lovelorn poet, Vladimir Lensky.  Lensky could have been a one note character, but Mahoney gives him dimension and makes him much more than he seems.   He is taken with Olga, portrayed with complexity and practicality by Josephine Moshiri Elwood.  Enter Evgeni Onegin, portrayed with a deep vibrato and roguish charm by Mark Linehan.  Linehan is charismatic, but also possesses a cynical, world-weary look on life while Tatyana, portrayed with pensive idealism by Sarah Pothier, may just change everything. 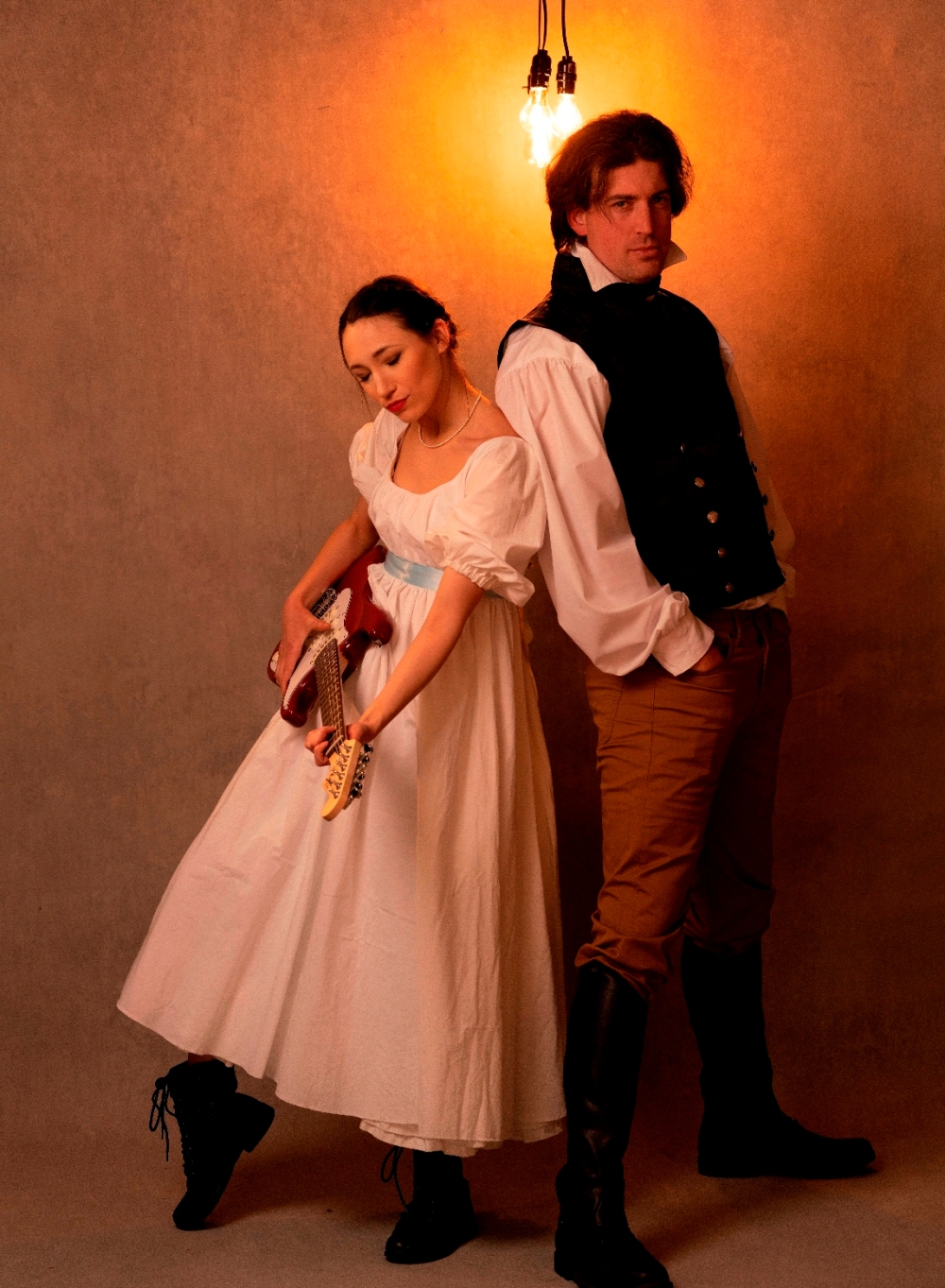 A few highlights include Sarah Pothier’s commanding performance of Let Me Die and stunning performances of In Your House and My Dearest Comrade by the cast.   Expect the unexpected at Onegin and like this engaging cast, prepare to have a little fun.

Woven into the lush, green indoor turf is a unique narrative with the clever earmarks of adolescence in Sara DeLappe’s Pulitzer Prize-winning play finalist, The Wolves.  Framed as a soccer match, this unconventional ensemble drama kicks off like a rocket, luring the audience into the tumultuous chattering of a competitive, all-girls soccer team who are about to learn a few valuable lessons about life and themselves in and out of the game.

Directed by A. Nora Long, Lyric Stage Company’s The Wolves continues through Sunday, February 3 at 140 Clarendon Street in Boston.  The show is 90 minutes with no intermission and contains some mature themes.    Click here for more information and tickets.

Photo courtesy of The Lyric Stage Company of Boston

What makes this show particularly interesting is the remarkable way the story is told.  With a 90 minute running time matching the length of an average soccer match, a horn blaring not only kicks off the latest match within the performance, but sometimes humorously ties in to interrupt a heated conversation.  As the audience as spectators peek into this team’s lives, the progressive nature in which they learn discipline, tolerance, and how to listen to each other is subtle, yet one of the most powerful parts of this compelling narrative. 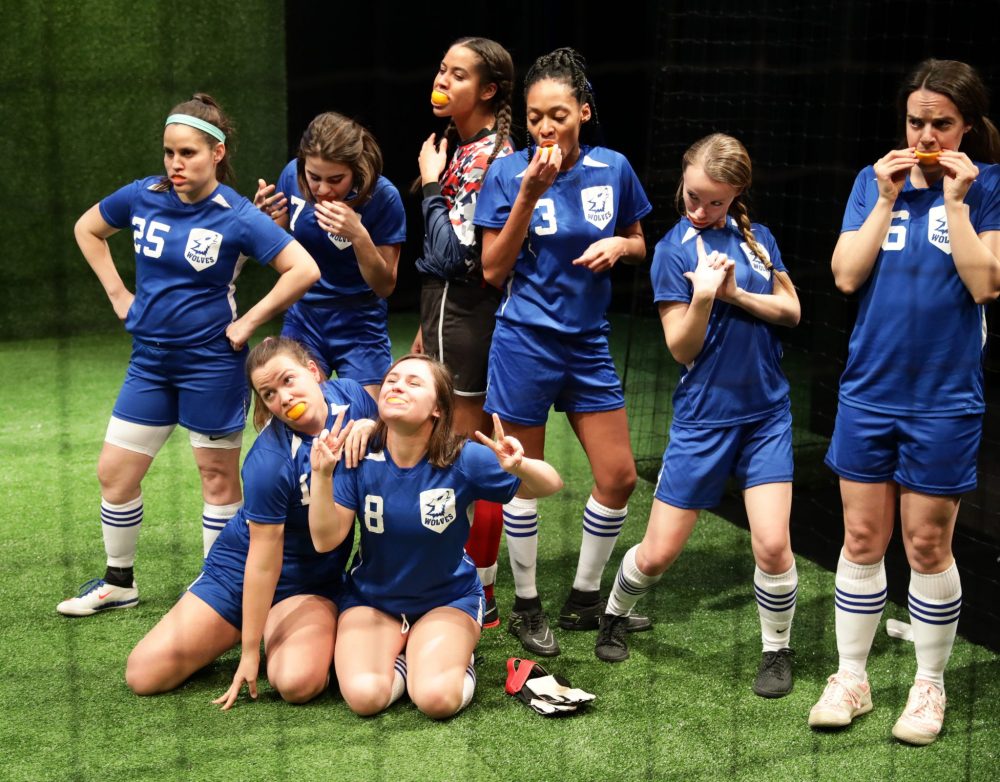 These teammates have a natural and at times, rumbling chemistry in their uninhibited conversations.  Whether they are delving into gossip around school, technology, getting their driver’s permits or scandalized by their maturing bodies, their viewpoints stay consistent with their level of maturity (right down to the abuse of the word, “like”) which can sometimes be insightful and other times, hilarious.

Though each cast member exhibits their own distinct personality in their matching uniforms, Valerie Terranova, who is making her debut on the Lyric Stage with this show, is a particular highlight as serious, optimistic player #25.  The wise, unassuming way she leads the team shows that while the other girls may only see what is right in front of them, #25 sees where the game might take them, united, one victory at a time. 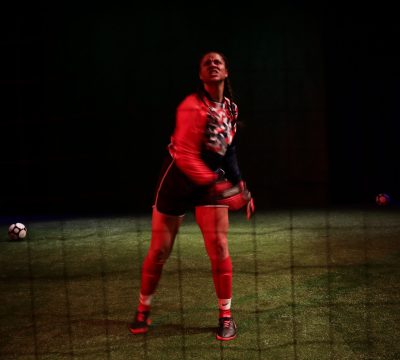 The Wolves may even serve as a nostalgic trip down memory lane, when you were a teenager and everything was the best thing in the world or the worst, the raging excitement of life.  It may even leave you scratching your head, trying to recall if being a teenager girl was really like this.  The undeniable answer, for the most part, was yes.

The Lyric Stage Company continues Sara DeLappe’s The Wolves through Sunday, February 3 at 140 Clarendon Street in Boston, Massachusetts.  Click here for tickets and more information.  Subscriptions and dinner packages are also available.  Follow The Lyric Stage on Twitter and Facebook for their upcoming productions and more.