Exploring love from obsession to at first sight, Greater Boston Stage Company couldn’t have chosen a more perfect time to introduce Swan Lake, one of ballet’s most popular productions of all time, with a bold and re-imagined twist the day after Valentine’s Day.

Tap dancing, ballet, and classic dance just skims the surface of the sheer energy that encapsulates Swan Lake in Blue, a brilliant production that transforms Tchaikovsky’s classic fairy tale into a lively, non-stop dance spectacle with big band flair.  Swan Lake in Blue has elements of that beloved classic in swan feathers, but set in thrilling 1940’s New York City.

Steve Bass not only seamlessly composed and musically directs Swan Lake in Blue, but also performs onstage with a full big band stately dressed in black and grey vintage sophistication.  The rollicking live orchestra instantly sets the mood of this vibrant, non-stop musical journey.  Swan Lake in Blue features an array of gloriously energetic, athletic dancers that keep the pace joyous and thriving while integrating popular dance moves of its time like the Charleston and Swing.  Each dancer gets an opportunity to shine and Jackson Jirard as Ben Kelly leads this agile group of exceptional talent.

Jirard is magnificent as he leaps and spins audaciously in tap shoes. Andy McLeavey as Seigfried and Jirard look like naturals dancing together, especially when Mr. Seigfried is first introduced. From Mambo to the Samba to the alluring Dance of the Swans, it is a wordless piece that invites dance to take over.

Swan Lake in Blue preserves the classic tale but gives it a Broadway spin involving a mobster, idyllic “swans” and a love struck Broadway producer set in a dance studio.  Odette, portrayed with elegance, fragility, and anguish by Sara Coombs, is a seemingly tethered soul longing for peace.  Coombs flourishes in the complex dual role which balances sass and sincerity as well as compassion and malicious glee through her carefully crafted sharp and sweeping dance moves.

Tchaikovky’s immortalized Dance of the Swans takes on a new, alluring spin as Briana Fallon and Gillian Gordon join Coombs decked out in feathery, white fringed dresses.  It’s a daring, yet fitting departure of Tchikovsky’s original dance and like the imaginative Swan Lake in Blue,  includes a few winks to the original.

One of my favorite lines from Robert Harling’s classic comedy drama, Steel Magnolias is stated by sarcastic and dour Ouiser, portrayed here by Ellen Peterson. “I do not see plays, because I can nap at home for free. And I don’t see movies ’cause they’re trash…and I don’t read books, ’cause if they’re any good, they’re gonna make ’em into a miniseries.”

This type of straight shooting and self deprecating humor is what has made Steel Magnolias thrive over the last 30 years.  Steel Magnolias has been adapted so many ways from stage to screen, but what Ouiser leaves out is her unmitigated opinion about a partial true story.

Robert Harling’s Steel Magnolias originated as a screen play in 1987 and is based off of real people Harling knew in Louisiana.  In the popular 1989 film (which included a parade of famous actresses including Dolly Parton, Olympia Dukakis, Daryl Hannah,  and Shirley MacLaine), M’Lynn was portrayed by Sally Field and Julia Roberts was Shelby.  Harling based M’Lynn on his own mother and Shelby (whose real name was Susan) on his sister.

Unlike the film, the play is set entirely in Truvy’s Beauty Spot in 1980’s Louisiana.   This bittersweet tale follows a group of vastly different women who find strength in each other through hardships and triumphs with a great deal of understanding, humor, and hairspray.

Director Johnny Nichols, Jr not only adds local attributes unique to the show’s setting such as the voice of local DJ Rick Terrell, but the 80s come alive with music distinctive to the era and various references such as Princess Grace, Cher, and Elizabeth Arden.  Costume designer Paula Ninestein and Wig Master Ryan Barrow emphasize the era with fringe and florals highlighting each woman’s distinct personality while Truvy’s is an expansive salon that includes a boom box and  a wall to wall mix of pastel floral and lace on busy wallpaper and curtains.  However, what was most refreshing about this era is to look back at a time before the internet where people shared time, recipes, and hair tips in person.

Though other productions have put a daring spin on Steel Magnolias over the years, Company Theatre’s production is traditional, warm, and thrives on the growth between these primarily outspoken southern women.  With her signature blond locks and a gift for gab and gossip, Stephanie Wells depicts fun loving salon owner, Truvy.  As a big fan of the movie, it is hard to imagine this part for anyone other than Dolly Parton, but in a black fringe blouse and pumps, Wells puts her own spin on sweet, welcoming, and confident Truvy.  Her scenes with Hannah Cunniff as mysterious and humble Annelle make for some quirky, heartwarming moments.  Wearing an awkward smile, Cunniff portrays Annelle with quiet unpredictability.

Ellen Peterson’s sardonic and darkly amusing Ouiser delivers some of the most entertaining moments in the show.  A bit softer than other productions but no less amusing, Peterson depicts Ouiser more dramatic than sour.  Ouiser has a casual style, but costume designer Ninestein make an intriguing statement by having her also wear a distinctive string of pearls, showing Ouiser may not be quite who she seems. Her sarcastic facade rings true with the priceless line, “I’m not crazy.  I’ve just been in a bad mood for forty years.”

Widow Clairee, portrayed with warmth and stylishness by Juliana Dennis, is a down to earth perfectionist with an interest in keeping up with the times while Ouiser couldn’t be bothered.  With good intentions and a knowing smile, Clairee amuses herself by teasing Ouiser and their exchanges create their own spark.

However, the most compelling relationship exists between Karen Cavallo as M’Lynn and Abigail Chase as M’Lynn’s daughter Shelby.  Though Sally Field depicted M’Lynn with a tough sadness, Cavallo’s M’Lynn exudes a sweet demeanor and quiet anxiousness. Cavallo is impressive navigating this complicated character.  Chase as Shelby seems cast on the younger side, but exhibits growing maturity as the show progresses.  It is easy to see why they are mother and daughter and not just by their remarkable resemblance.  Cavallo is sensible while Shelby is impulsive and as with any mother-daughter relationship, one minute they exchange nagging barbs and the next, nurturing affection.

Rewind the clock and take a trip south to Truvy’s for Company Theatre’s Steel Magnolias at Company Theatre, 30 Accord Park Drive in Norwell, Massachusetts through Sunday, February 16.  Click here for more information and tickets, here for details on their upcoming “Galentine’s Day” and here for more on their 2020 season.

Maytag Virgin has a charming way of airing out the laundry.

Loss and laundry is just the tip of the iceberg in Audrey Cefaly’s moving romantic comedy, Maytag Virgin.  Poignantly directed by Eleanor Holdridge and presented by Merrimack Repertory Theatre (MRT) Maytag Virgin continues through Sunday, February 2 at Liberty Hall in Lowell, Massachusetts.  This show is not suitable for young children.  Click here for more information and tickets. 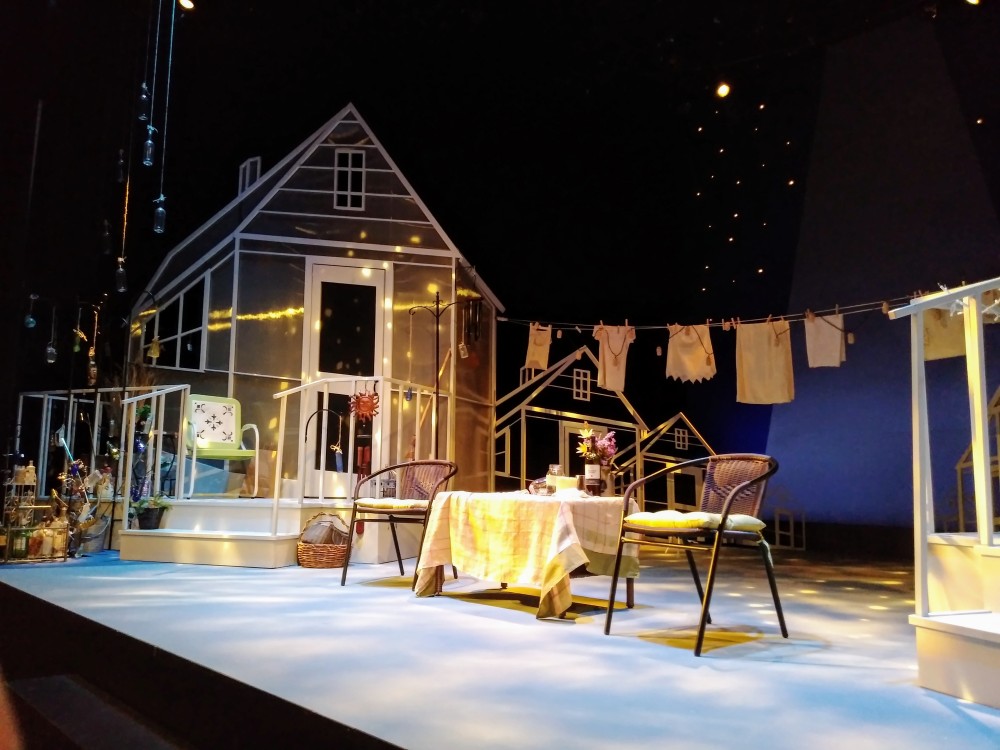 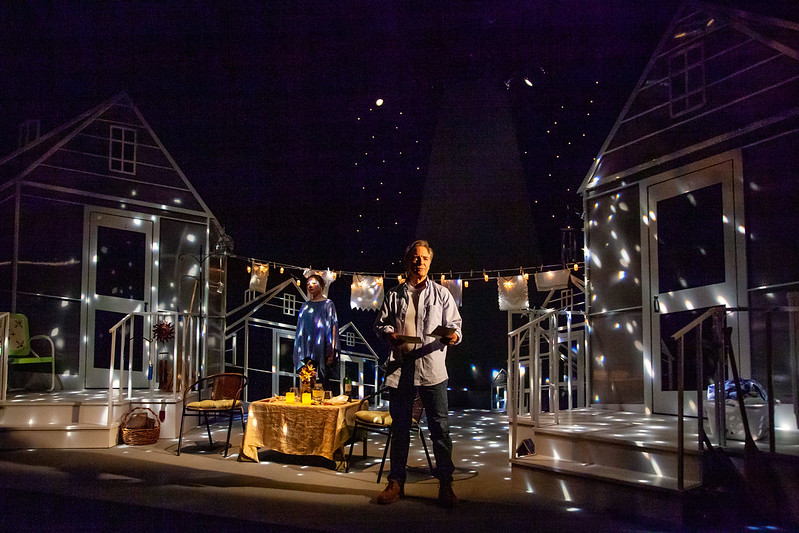 Set in Southern Alabama, Maytag Virgin focuses on next door neighbors who find common ground despite their vast differences.  Kati Brazda is engaging as outspoken, sensitive, and newly widowed Lizzie, a goldmine of chatter who suffers from the unfamiliarity of living alone.  In a messy updo, Brazda captures Lizzie’s awkward anxiousness and need to control her surroundings through her frank and excitable demeanor.  Having only lost her husband only a month ago, it is easy to see how her grief and loneliness is seeping into her everyday life.

David Adkins is amiable as stoic and good humored Jack, Lizzie’s new neighbor she politely calls Mr. Key.  He is quiet and more familiar with solitude.  They discuss everything from neighborhood gossip to religion to their sad stories.  Both are stubborn and guarded, dealing with their grief in different ways.  However, what makes these two fascinating is not so much in the things that they say to one another.  It is what they reveal about each other through slight and subtle actions that could easily go unnoticed, but Brazda and Adkins do well to reveal more about themselves in a glance or a long pause much more than in their insightful dialogue. 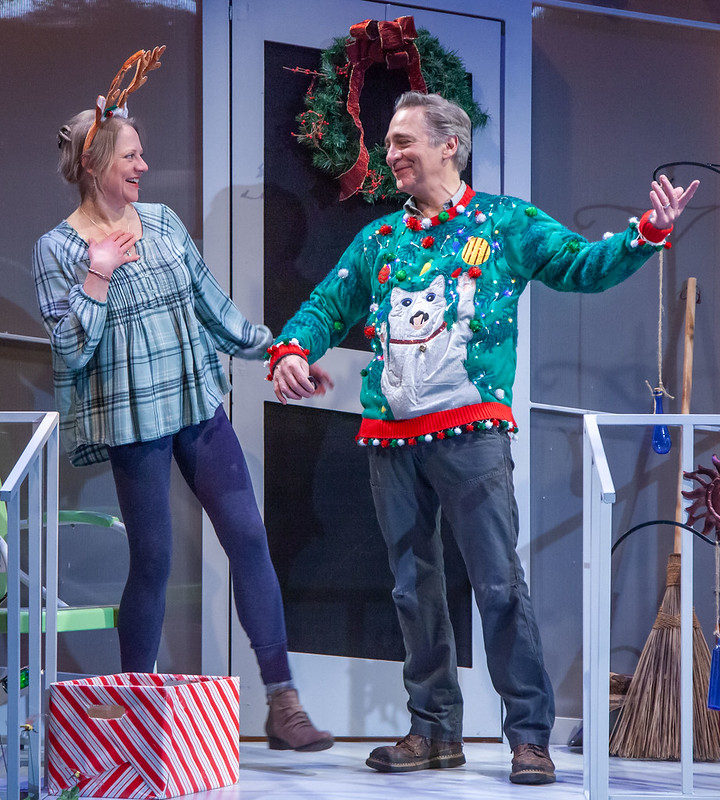 Lizzie has never used a dryer and Jack doesn’t know what to do without one.  It’s never to too late to start again.

William Forsythe’s full length masterpiece, Artifact, a revelation in the art of dance and has thrilled audiences since its stage premiere in 1984.  Artifact continues through Sunday, March 5 at the Boston Opera House, 539 Washington Street in Boston, Massachusetts.  Click here for tickets, call 617-695-6955, or visit the Boston Ballet box office at 19 Clarendon Street in Boston, Massachusetts.  Take a closer look at William Forsythe’s Artifact here.

The Boston Ballet boasts a monumental lineup for its 2017-18 season including timeless romantic classics such as Marius Petipa’s The Sleeping Beauty from April 28 to May 27, 2017 and John Cranko’s Romeo & Juliet from March 15 through April 8, 2018.  This season is also filled with masterful works such as Kylian/Wings of Wax from March 23 through April 2, Robbins/The Concert from May 5 through May 27, Obsidian Tear from November 3 through November 12, and the return of Tchaikovsky’s beloved holiday classic, Mikko Nissinen’s The Nutcracker from November 24 through December 31, 2017.  Click here for a closer look at all of Boston Ballet’s 2017-18 season highlights.

Lovers and Other Strangers will be held for two weekends only.  Performances take place on Fridays February 10 and 17 and on Saturdays February 11 and 18 at First Parish Church at 842 Tremont Street (Rte 3A) in Duxbury, Massachusetts at 8 p.m.  Directed by Michael Pevzner and showcasing an intimate cast of ten local actors, click here to get more information or tickets to Lovers and Other Strangers, call 781-269-9885, or email Bay Players at tickets@bayplayers.org.  Tickets are also available at the door.  Group, student, and senior rates available.  Follow Bay Players of Duxbury on Facebook for updates, upcoming auditions, and more.

Having kicked off another sensational season with the return of Pianos in Boston, Celebrity Series of Boston’s 78th season has been offering a broad spectrum of captivating performances in their 41 show lineup including the debut of the Vertigo Dance Company, the Berliner Philharmoniker led by conductor Sam Rattle, as well as Argentine cello star, Sol Gabetta with French pianist Bertrand Chamayou.  Celebrity Series of Boston is taking audiences through the winter and spring with mesmerizing performances by Yo-Yo Ma, The Art of Elegance with Kristin Chenoweth, KODO’s 35th anniversary, and the return of the concert series, Stave Sessions.  Click here for more information and the full calendar.

Presented on the Berklee College of Music campus and sponsored by Susan and Michael Sonis, Margaret Eagle, and Eli Rapoport, Celebrity Series of Boston offers five consecutive nights of dynamic, live music in jazz, classical, indie, Moroccan, and contemporary flavors.  Each night has its own unique feel and takes place from Tuesday, March 21 through Saturday, March 25 at 8:30 p.m. 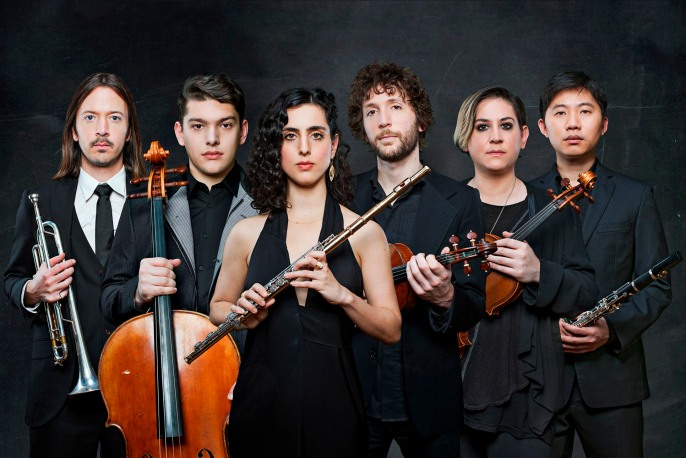 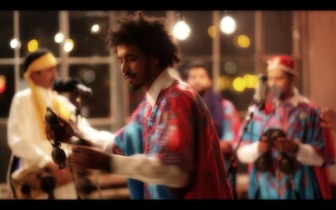 Why follow one story when Cohasset Dramatic Club offers several stories in two consecutive evenings?  Cohasset Dramatic Club proudly presents their fourth annual show, Briefs a variety of ten-minute plays on February 3 and 4 at 7:30 p.m.  Briefs takes place every February with different directors that include drama, comedy, and much more.  Click here for the full list of plays and for tickets.

Directed by Lisa Pratt, Brian Chamberlain, Kelly Hines, Andrew Lemieux, and Barbara Baumgarten, Briefs features a large cast of characters and audiences can enjoy cabaret-style seating serving snacks and beverages included in the ticket price.  All performances are held at Cohasset Town Hall, 41 Highland Ave in Cohasset, Massachusetts.  Call 617-922-0280 or click here for tickets, which will also be available at the door.