Grammy award-winning singer-songwriter Billy Joel will not be sharing new music any time soon.  Renowned for his library of hits in the 70s, 80s, and 90s, he stuck with the chart toppers and some lesser known singles at the Fenway Park field on Friday, August 10 as part of the Plainridge Park Casino Fenway Concert series.

‘I haven’t had a hit in 25 years,’ he muses, ‘but I have also not released an album in 25 years.’  Opening fittingly and dramatically with the theme song from The Natural, a beloved 1984 sports film starring Robert Redford, Billy Joel took the Fenway Park stage for his fifth year.  Click here to see where Billy Joel will perform next.

Showcasing his biggest hits along with a few of his lesser known ones, Billy Joel brought his A-game.  Kicking off shortly after eight in the evening as fans were still filing into the park, he arrived behind his piano for his straight-talking hit Big Shot, a song that was said to have been inspired by a dinner he had with Mick and Bianca Jagger.  Under multicolored lights and an infectious beat, from the start Billy Joel proved his ceaseless energy at 69 years old.

On a cloudy, but rainless night in Fenway, Joel referred to Boston as the birthplace of freedom where he wrote the song, My Life.  He also mentioned the Red Sox, though he’s an avid NY Mets fan, before a stirring rendition of NY State of Mind, which featured shots of New York City’s famous landmarks.  He even playfully sang Boston’s More than a Feeling before jokingly “forgetting the words.” 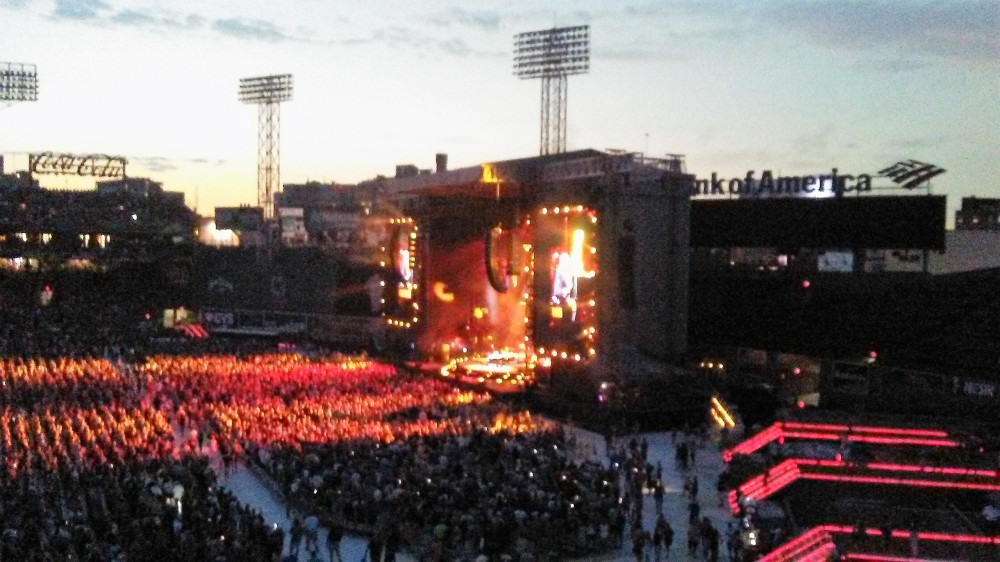 Sharply dressed in a dark suit and tie, Billy Joel spoke with humor and frankness, sharing personal details behind his music, his voice matured into a deeper, grittier growl with all the same power behind it.  He treated the enthusiastic full house to a spectrum of his famous and lesser known songs as he reflected, ‘I worked just as hard on the lesser known songs as the hits.’  Some of those lesser known songs included Summer, Highland Falls, Zanzibar, The Downeaster Alexa, and Vienna, a sweet, quiet tune from his album The Stranger and was also featured on the 13 Going on 30 film with Jennifer Garner.

Accompanied by a robust rock, jazz, and horn-infused big band, Joel performed upbeat number, Movin’ Out (Anthony’s Song), a hit song that inspired a 2002 Tony award-winning Broadway musical of the same name.  The musical highlighted a number of Billy Joel’s greatest hits.  Dedicating a song to his three year-old daughter, Joel performed Don’t Ask Me Why as well as many of his signature hits including a resonant Only the Good Die Young, Scenes from an Italian Restaurant, a colorful, extended version of River of Dreams, and It’s Still Rock and Roll to Me.

The award-winning singer-songwriter kept the crowd on their feet with surprise guests from two vastly different genres.  Peter Wolf, lead singer of the J.Geils Band, a group Billy Joel opened for early in his career.  Wolf performed the band’s 80s hit, Centerfold before calling Joel one of the nicest in the business.  Def Leppard’s Joe Elliott, who was to perform with the band at Fenway the following night, also joined Joel.  Accompanied by powerful guitar, Elliott’s deep, throaty vocals delivered their audacious hit, Pour Some Sugar on Me.  As welcome as their appearances were, it couldn’t beat their return to the stage later to sing with Joel for You May Be Right.

Joel also had his share of quiet moments as he silenced the crowd with the emotional, heartfelt number, And So it Goes and She’s Always a Woman.  Sitting behind the baby grand piano most of the evening with a brief stint humming on the harmonica for Piano Man before taking to the guitar during an epic, four-song encore, Billy Joel still has a seasoned passion for the stage and left with hardly a voice, delivering short of a three hour performance.