“Boston is my second favorite place in the world,” reveals a glimmering Kristin Chenoweth, “Don’t tell New York.”  Wearing a black, glitzy cocktail dress paired with shining silver pumps and a megawatt smile, award-winning singer and film, television, and musical theatre actress Kristin Chenoweth excitedly burst onto the Boston Symphony Hall stage, standing before an equally shimmering microphone as the crowd roared.  “I feel like I’m in Oklahoma,” she revealed, sipping from a large Dunkin’ Donuts cup, “It feels right.”

It also felt right for the enthusiastic, packed house as Chenoweth kicked off her one night only, Celebrity Series of Boston debut of An Intimate Evening with Kristin Chenoweth on Sunday, April 30.  Symphony Hall was appropriately lit in Chenoweth’s signature color as Greek statues above the balconies gave off a violet and pink hue.

Greeting the audience with Should I be Sweet by Vincent Millie Youmans from the musical, Take a Chance, a thrilling, flirtatious ode debating the perfect way to present oneself, Chenoweth immediately lured the audience in with her engaging, vivacious, and wonderfully charming personality as well as her rich, unstoppable vocals.  From beautiful stories about her parents to her unfailingly optimistic, humorous, and unbridled reflections on her life and career, Chenoweth proved not only a brilliant entertainer, but an incredible joy just to spend time with.

Accompanied by her Worcester-raised Music Director Michael Orland on piano, who is also the vocal coach to the hit show, Little Big Shots, Kristin Chenoweth spoke about a few of her past career highlights in television such as GCB, West Wing, Glee, Pushing Daisies, and Hairspray Live, to new projects such as a recently filmed pilot set in Boston as well as her new role on American Gods that premiered on Starz that same evening.  Chenoweth also revealed a few significant roles that horrified her God-fearing parents, having been raised in the Bible belt in Oklahoma.  For instance, having heard about Chenoweth’s new role as a witch in Wicked, Jerry and Judy Chenoweth shockingly asked, “Is the show satanic?”  She also launched into the scandalous Broadway tune from the hit musical, A Chorus Line called Dance Ten Looks Three, cheekily toning down the lyrics to coincide with her conservative upbringing.

What makes An Intimate Evening with Kristin Chenoweth so powerful is for that evening, Chenoweth’s uplifting view of life helped to make life a bit more bearable, even in its sadder moments.  Her recitation of The Obituary of the Pillsbury Doughboy was a particular highlight as a moment of silly humor following a glorious and emotional rendition of the beloved song, Bring Him Home from the musical, Les Miserables as she alluded to the Boston and Oklahoma bombings, a painful reminder of what Boston and her hometown have in common.

Chenoweth warmly shared her early experiences longing to become a ballerina, her surprising friendship with Julie Andrews, and what inspired her latest Grammy-nominated album full of Chenoweth’s favorite songs from the American Songbook, The Art of Elegance.  She sang a poignant, timeless selection from the album by Hoagie Carmichael and Johnny Mercer, I Get Along Without You Very Well.  She also delivered a few of her signature songs with lively exuberance such as Taylor, The Latte Boy and Popular from the musical, Wicked, her soaring, silvery, classically-trained vocals dancing from pop to operatic, perfectly complementing her witty sense of humor.

Chenoweth surprised the audience by bringing out the Boston Conservatory and Boston City Singers to join her onstage to perform as she expressed her love of mentoring students and her love of all faiths.  “For those who don’t believe,” Chenoweth added, “this will be over in four minutes.”  Accompanied by the two choirs, she launched into the worship song, Upon this Rock.  Her performance closed with what Chenoweth refers to as her anthem, I was Here, though her tender, memorable encore, Smile, may have also stayed with the audience long after the show was over.

Click here to see where the award-winning Kristin Chenoweth will be touring next as well as how to get a copy of her latest album, The Art of Elegance.  A few performances remain in the Celebrity Series of Boston’s season.  Click here for tickets and for a closer look at this season’s shows and here to take a peek at their recently announced 2017-18 season.  Follow Celebrity Series of Boston on Facebook and Twitter for updates.

From the first few angelic notes from one of Oklahoma’s most popular songs, Oh What a Beautiful Morning sung a capella by Jack Cappadona as charismatic Curly, it is easy to see that Hingham Civic Music Theatre’s (HCMT) spring musical is something special.  Celebrating its 75th anniversary, Hingham Civic Music Theatre’s Oklahoma! combines elegant costuming, an impressive, distinctive cast, and an interactive set that makes the audience settle into its own home on the range.  With its wealth of historical references weaved into Rodgers and Hammerstein’s classic soundtrack capturing the spirit of the time, it is no wonder that Oklahoma! won the Pulitzer Prize for musical composition in 1944 and remains relevant today.  Hingham Civic Music Theatre delivers the show’s joyous zest for life, comedy, and, make no mistake, dark moments with zing and suspense.

Directed by Nathan Fogg and musically directed by Sandee Brayton with choreography by Tara Morrison, Hingham Civic Music Theatre offers two remaining performances of Rodgers and Hammerstein’s musical, Oklahoma! on Saturday, April 29 and a Sunday matinee on April 30 at the Sanborn Auditorium in Hingham, Massachusetts.  Click here for more information and for tickets.  Tickets are also available at the door.

Based on Lynn Riggs’ play, Green Grow the Lilacs, an interactive, colorful, and rustic set rewinds the clock to the Oklahoma Indian Territory at the turn of the century, equipped with softly flickering lanterns, vintage photos, bales of hay, colorful blossoms, lush greenery, and interactive props hanging on the walls.  In this particular production, the lighting is its own character, effectively setting the mood from a soft, rising sun to a nightmarish hue.

The splendid costumes, by Kathryn Ridder, are meticulously-detailed from gold embroidered shirts, brightly-colored satin costumes to delicate, richly-designed dresses with thick bows and petticoats.  Whether it is a cow scarf adorning an outfit or a carefully matched wicker hat, those details wonderfully capture the authenticity of the time.

Ruggedly dressed in suede chaps over khaki pants with a button down shirt and cowboy boots, Jack Cappadona portrays Curly McLain with an imaginative streak and a confident and at times, a mischievous smile.  Whether engaging C.J. Hawes as Laurey in a whimsical carriage ride during the playful song, The Surrey with the Fringe on the Top or musing about life in Oh What a Beautiful Morning, with silvery vocals, Jack slides right into the role as Curly with a natural charm.  With curly red hair and green striped overalls, C.J. Hawes portrays sassy, levelheaded Laurey with great comedic timing and sardonic wit.  Jack as Curly and C.J. as Laurey are enchanting together and their soaring vocals make beautiful harmony. 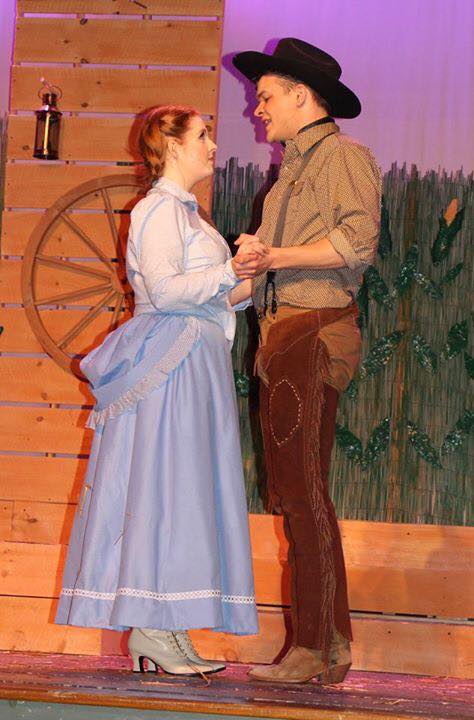 With thick curly hair, bright eyes, and a deep drawl, Rylan Vachon portrays Will as fun loving, somewhat hotheaded, and spontaneous.  Will’s rendition of the song, Kansas City, has never been more fun with lively vocals and slick choreography as The Territory Boys stomp, slide, and perform various stunts.  The entire cast captures the distinct spirit of Oklahoma! in all its stomping, sweeping joy. 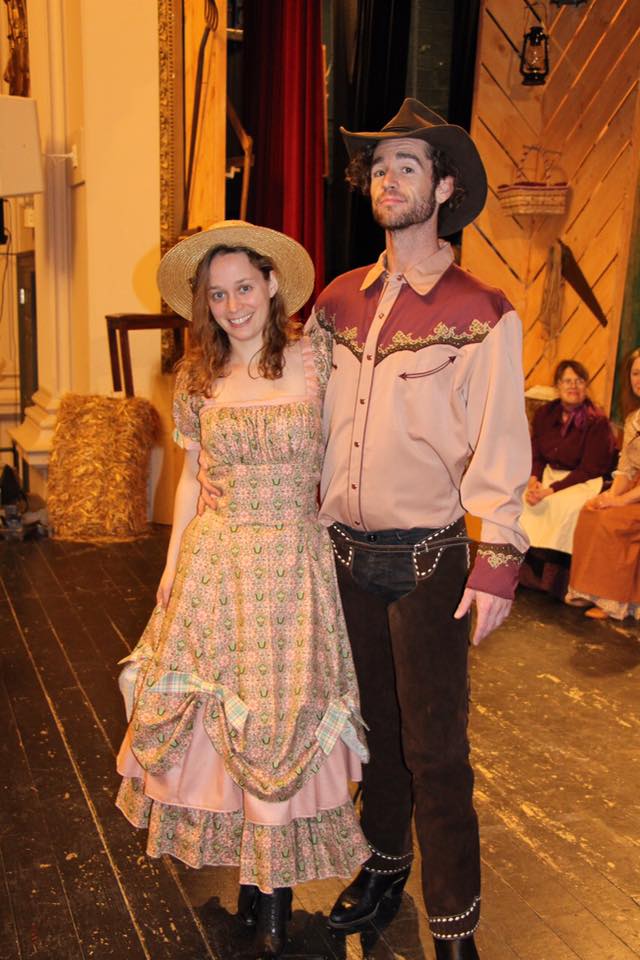 Jess Phaneuf as Ado Annie brings a wild-eyed vivaciousness to the role.  She seems to know how to take command of any room she is in one way or another with a wink and a grin.  Her interaction with any cast member is fascinating and her comic timing is infallible.  Her chemistry with both Will and Michael Andre as bewildered peddler Ali Hakim, have their own distinct charm.  Michael Andre as Ali Hakim does a great job of balancing a dynamic character with comedy and cleverness.

Athan Mantalos portrays disheveled, hired hand Jud with a slow burn and deep, compelling, operatic- sounding baritone.  Athan masters this role in the quiet moments, adding tension and making his character that much more mysterious.  His scenes with Curly are especially powerful and their vocals have seamless harmony.

With spectacles and a high collared dress, Kate Fitzpatrick brings sensibility and a bit of sarcasm to the role of Aunt Eller, who is much wiser than she lets on.  Emily Gouillart as Gertie Cummings is a great deal of awkward fun with an unmistakable laugh.

Hingham Civic Music Theatre’s Oklahoma!  offers its share of romance, comedy, and plenty of uproarious moments, but dark moments as well.  Rodgers and Hammerstein wrote their second musical, Carousel, shortly after Oklahoma’s success and both shows share some of the same themes.  Hingham Civic Music Theatre delicately weaves in the themes of loneliness, temptation, and violence effectively, balancing this timeless tale.

Hingham Civic Music Theatre offers two remaining performances of Rodgers and Hammerstein’s musical, Oklahoma! on Saturday, April 29 and a Sunday matinee on April 30 at the Sanborn Auditorium in Hingham, Massachusetts.  Click here for more information and for tickets.  Tickets are also available at the door.  Be sure to follow Hingham Civic Music Theatre on Facebook and click here to learn how to support HCMT’s upcoming productions.

Hingham Civic Music Theatre, a theatre group whose most recent productions included The Wizard of Oz, Young Frankenstein, Once Upon a Mattress, and their most ambitious musical to date, Disney’s Beauty and the Beast, is going country.   This spring, Hingham Civic Music Theatre presents the Rodgers and Hammerstein’s Pulitzer Prize-winning musical, Oklahoma! in recognition of the show’s 75th anniversary.  Click here for a sneak peek.

A sweeping musical with suspense, comedy, romance, and some of Broadway’s most memorable numbers,  Hingham Civic Music Theatre proudly presents Oklahoma! for two weekends only from Saturday, April 22 through Sunday, April 30 at the Sanborn Auditorium in Hingham, Massachusetts.  Click here for more information and for tickets. 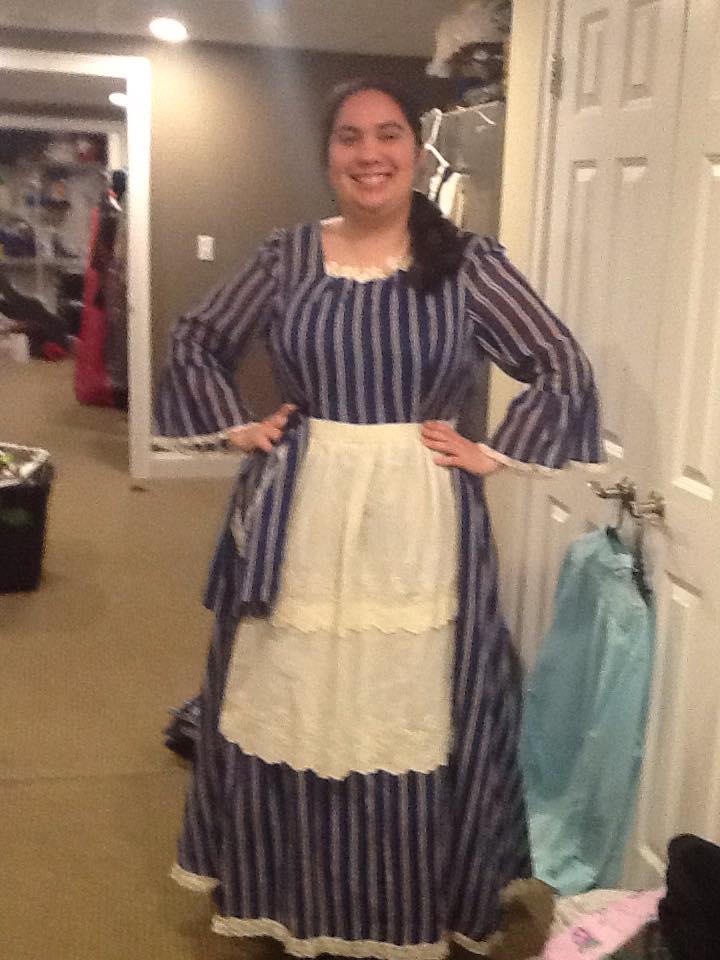 Directed by Nathan Fogg and musically directed by Sandee Brayton with choreography by Tara Morrison, Oklahoma! is based on Green Grow the Lilacs, a 1931 play by Lynn Riggs.  Set in the Oklahoma territory at the turn of the century, settlers explore the beauty and dangers of life on the range where some may be facing their biggest challenge yet: love.  Oklahoma! includes an exciting array of popular musical numbers including People Will Say We’re In Love, Oh, What a Beautiful Morning, I Cain’t Say No, and the title track, Oklahoma.

Help support Hingham Civic Music Theatre as they raise money to upgrade their sound and lighting equipment for this production, their fall musical, Shrek, and for the quality of future shows.  Click here to be a part of this fundraising campaign.

For tickets and further details, click here or email hcmttickets@gmail.com.  Group and discount tickets are available.  All performances will be held at the Sanborn Auditorium, 210 Central Street in Hingham, Massachusetts and follow Hingham Civic Music Theatre on Facebook for upcoming events and more.