The Company Theatre is reprising their original, award-winning production of ‘Paragon Park the Musical‘ to cap off their 40th season from Friday, July 26 through Sunday, August 18 with a VIP reception taking place on Saturday July 27.  Winner of the Moss Hart Award in 2012 for Best New England Production, ‘Paragon Park the Musical’ returns with a new cast including Michael Hammond as George A. Dodge and some returning cast members.

A portion of the proceeds from the tickets will be donated to the beloved Paragon Carousel.  Performances will take place at the Company Theatre, 30 Accord Park Drive in Norwell, Massachusetts.  Tickets are selling fast.  Click here for more information and how to get tickets and here about the Paragon Park VIP reception.

Click here for a clip of the original production.  Here is what the Sleepless Critic had to say about this production when it first debuted onstage in Summer 2012…

As the dazzling chandelier is to the musical, ‘Phantom of the Opera’ or a certain symbolic revolving stage is to ‘Les Miserables,’ the original, historic carousel used in the Company Theatre’s exciting production of ‘Paragon Park the Musical’ exudes its own brand of theatre magic.  It serves as a pulsing centerpiece into creator George A. Dodge’s timeless imagination as well as the depth and delight of what made children and adults embrace that revolutionary park in Hull, Massachusetts for nearly 80 years and beyond.

‘Paragon Park the Musical’ is an original production by Company Theatre co-founder Zoe Bradford and director Michael Hammond with lyrics and music by composer Adam Brooks.  Performances continue through Sunday, August 19, 2012 at 30 Accord Park Drive in Norwell, Massachusetts.  This highly-anticipated musical is enjoying a brilliant run, with nearly every show sold out weeks in advance.

What makes this particular production so popular is it depicts the history of a beloved beachside amusement park that closed in 1984 and actually existed in Hull, Massachusetts.  Historic Paragon Park encapsulates many happy memories to Massachusetts natives, especially those in the South Shore.

‘Paragon Park the Musical’ tells the story of warm, ambitious, and imaginative whaling mogul George A. Dodge, who was passionately inspired to entertain Massachusetts residents and beyond with a revolutionary beachside amusement park.  It also tells a story of forbidden romance and a glimpse into the lives of the real people who resided in that little seaside town in Hull.  The Company Theatre’s ‘Paragon Park the Musical’ not only shines a historical lens into a piece of the South Shore’s dynamic history, but the picturesque settings paint a crisp portrait with each scene. 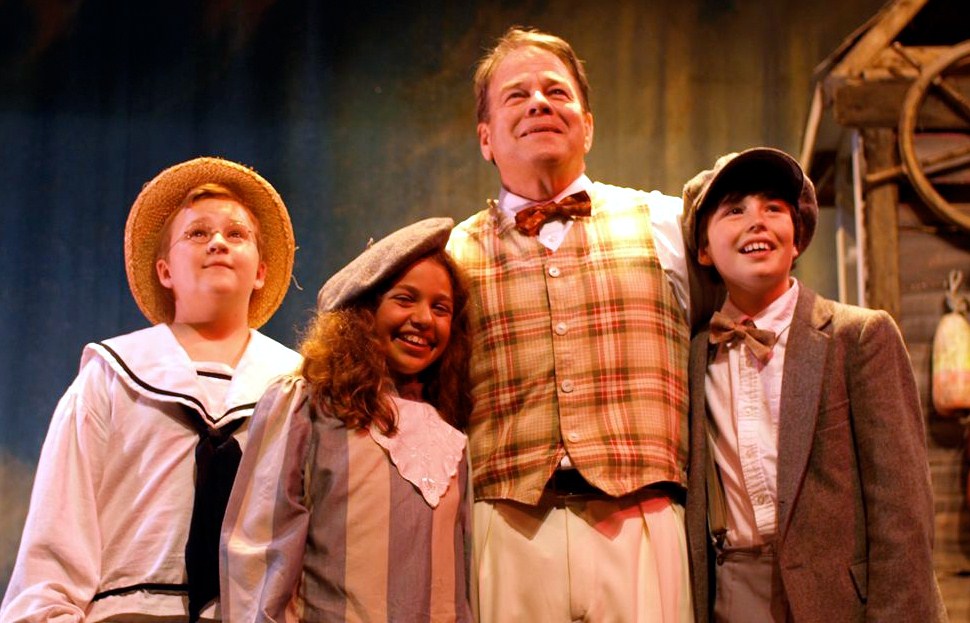 Scott Wahle as George A. Dodge with cast in the 2012 production Photo courtesy of Zoe Bradford/Company Theatre

The cast is very much an ensemble and delves into various social issues, family issues and immigration, giving insight into each character’s devotion to the park, showing what truly made the park endure for nearly 80 years.  Boston broadcast veteran Scott Wahle is charming and clever as George A. Dodge, portraying him with a twinkle in his eye.   He is full of charisma and authenticity throughout the show and is a delight to watch with children.

It is wonderful to see so many strong female characters such as strong willed Tilly, portrayed with vivacity by Joyce McPhee, discerning Amira, played by Maya Carter, sharp and spirited journalist Floretta Vining, depicted by Victoria Weinstein, and spunky and ambitious Mrs. Rose Stone, played by Juliana Dennis.  The practical Mrs. Rose Stone’s strong presence is a fine match for George A. Dodge’s relaxed humor.  Rinado, portrayed by Nick Cox, is a combination of rugged good looks and captivating naivety, while John King’s Ogden has a spectacular sneer.  Dave Daly is refreshing as lively and cheerful Honeyfitz, who showcases soaring vocals and can play a spirited rendition on a ukulele too!

Each of Paragon Park’s original 18 numbers are polished and lyrically rich.  The musical’s exhilarating songs, One Last Ride and Paragon Park are delivered with spectacular energy and passion.   The humorous song, Over the Bridge sets a cheerful tone and depicts a few glorious aspects of being young through the wonder of the park.  Joyce McPhee’s Long Lost Love compliments her stunning vocal range and was a crowd favorite.  Massachusetts residents will delight in many well-known local references in the show, especially in the welcoming number, Nantasket for a Day. and A Proper Life.

The sets and costumes range from elegant and sophisticated to colorful and humorous.  The question, “Did I really wear that?” may also come to mind.  The sets are colorful, detailed, and the backdrops are simply stunning.

Through meticulously detailed costumes, ‘Paragon Park the Musical’ brings to life important eras of the park’s history with ease.  With 18 original numbers, a powerful 20-piece orchestra, and the enthusiasm of each cast member, the Company Theatre’s ‘Paragon Park the Musical’ is a beautiful creation, a love letter to its creator and the many people who hold dear memories of the park’s heyday.