The Boston Pops turned up the heat as dancers from Dancing with the Stars, So You Think You Can Dance, and America’s Got Talent as well as American Idol finalists joined Academy Award-nominee Lesley Ann Warren as Scott Stander presented Dance to the Movies on June 9 at Symphony Hall.  Conducted by renowned Music Director Keith Lockhart and filled with memorable moments from some of Hollywood and Broadway’s most popular films, Dance to the Movies lit the stage as part of Boston Pops 133rd spectacular season.  Dedicated to legendary, Lawrence-born composer and conductor Leonard Bernstein’s centennial this season, click here for upcoming Boston Pops performances including details for the Boston Pops Fireworks Spectacular on July 4.

Before launching into Dance to the Movies, The Boston Pops performed a few remarkable Bernstein selections which included an urgent, masterful orchestration composed by John Williams, a piece first conducted for Bernstein’s 70th anniversary called, To Lenny! To Lenny!  The orchestration, with equal parts bursting triumph and quiet contemplation, set the perfect tone for this uplifting show.  The Bernstein tribute continued with sparkling and upbeat Overture to Candide and the chiming, peerless orchestration of Bernstein’s spiritual Simple Song from Mass.

Winner of 2017’s Boston Symphony Orchestra’s Concerto Competition and recipient of Harry & Marion Dubbs Brookline Youth Concerts Award, captivating violinist Haig Hovsepian, delivered a passionate and intense solo performance as he played Sibelius’s First Movement:  Allegro moderato, from Violin Concerto in D Minor.  An especially touching moment occurred when a couple of his proud family members rushed to the stage to congratulate him after he finished his piece.

Puttin’ on the Ritz Photo courtesy of Hilary Scott

Boasting an enormously talented cast, Dance to the Movies offered vintage flair by Bair/Pututau costumes and sizzling footwork, taking on classic numbers like Puttin’ on the Ritz and Diamonds are a Girl’s Best Friend/Material Girl from the film, Gentlemen Prefer Blondes.  Hearkening to the age of Fred Astaire, dancers dressed in gold Lemay cocktail dresses and suits with coat and tails then delivered a double take of dancers dressed in Marilyn Monroe’s signature pink gowns with dripping diamonds respectively.  A gorgeously sparkling fringed gown seemed to have a life of its own on Anna Trebunskaya as she swayed with Tristan MacManus to the spicy number, Cuban Pete from the film, The Mask.

Academy Award-nominee Lesley Ann Warren, a television and film veteran known for Cinderella and Clue, delivered a reflective Moon River from Breakfast at Tiffany’s and a flirtatious version of Blues in the Night from the film by the same name.  Warren still has that charismatic charm as she engaged the audience.

Dance to the Movies tackled Broadway with dance melodies from Chicago and Grease, which featured a performance by American Idol finalist Vonzell Solomon singing Roxy Hart.  Vonzell delivered a show stopping performance singing I’ll Always Love You from The Bodyguard before taking the stage with American Idol finalist Von Smith for a stirring tribute to the late Marvin Hamlisch including the songs, Through the Eyes of Love from the film, Ice Castles and The Way We Were. 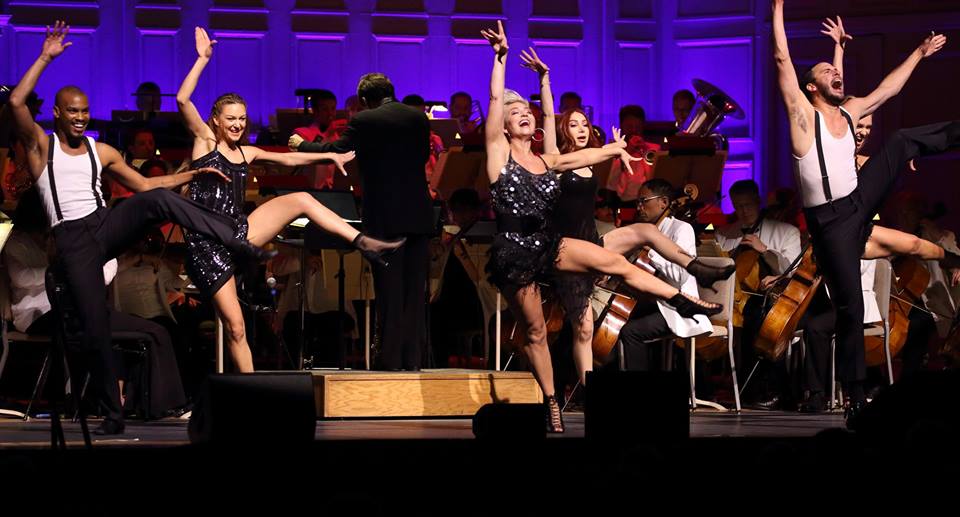 One of the most impressive dance performances seemed a dangerous feat to the tune, Unchained Medley from the film, Ghost sung by Von Smith.  Featuring Randi Strong and Jonathan Platero, it was a rapturous, athletic number recreating a scene from the film featuring remarkable flips and daring spins. Dirty Dancing’s iconic dance number, (I Had) The Time of My Life, featuring a trio of couples, was a beautiful display complete with The Lift.

Dance to the Movies boasted Dancing with the Stars’ Tristan MacManus, Anna Trebunskaya, Magda Fialek, Anya Fuchs and Oksana Platero, from So You Think You Can Dance Jonathan Platero, Randi Strong, and Jaymz Tuaileva, America’s Got Talent’s Antonio Martinez, with Carl James Bair, Alisa Davtyan, Timothy Lewis, Kateryna Klishyna, and Tony Pututau.  Click here to see where Dance to the Movies will appear next.